Sleep apnea impacts truckers more than others, leading to accidents 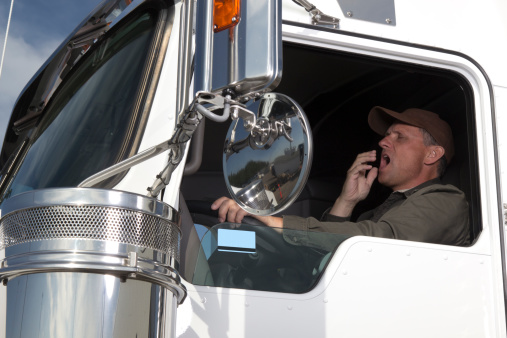 Fatigue is the most cited cause of heavy truck accidents, according to the National Transportation Safety Board. Fatigue also causes about a third of crashes that kill the truck driver, the federal agency said on EHS Today. The further bad news for truck drivers and their often-sedentary working conditions is that studies show they are nearly nine times more likely than the general population to suffer from the breathing-problem called sleep apnea.

“Apnea” is Ancient Greek meaning “without breath,” which is at the heart of why this sleep disorder is so deadly. It affects around 4 percent of the general population but as much as 35 percent of truckers, according to FreightWaves, a data and content forum on the freight industry, based in Chattanooga, Tennessee.

That means that a lot of truck drivers, suffering from disrupted sleep, struggle with staying alert when driving. Untreated sleep apnea can make it difficult to stay awake, keep eye focus and react quickly while driving. The result can be crashes.

The FreightWaves story said there were three types of sleep apnea:

According to The Guardian, a study of 905 Italian truck drivers found half suffered from breathing disorders. This was due to a lifestyle that forces drivers to sit for several hours a day, with little physical activity and a poor diet, leading to a greater risk of excessive daytime sleepiness and of dozing off unexpectedly while driving.

The study, which was done in 2018 at the request of the Italian truck driver cooperative Federtrasporti, also found that 77 of truckers were overweight or obese. The National Transportation Safety Board said fatigue was the most frequently cited cause of heavy truck crashes, accounting for 30-40 percent.

Fatigue was the cause of 31 percent of the 182 fatal-to-the-truck-driver accidents studied, the agency said.

A study in 2002 found that 28 percent of commercial truck drivers have mild to severe sleep apnea. The study was done by the Federal Motor Carrier Safety Administration (FMCSA), an agency of the United States Transportation Department, and the American Transportation Research Institute of the American Trucking Associations.

The FMCSA said these factors may put someone at higher risk of sleep apnea:

The FMCSA said these are the symptoms:

The good news is that properly diagnosed, sleep apnea can be treated. The FMCSA requires that truck drivers get regular medical exams to spot conditions like sleep disorders.

Contact Weinstein Law in East Texas today for help with truck accidents caused by drowsy driving, or any other type of truck or car accident.