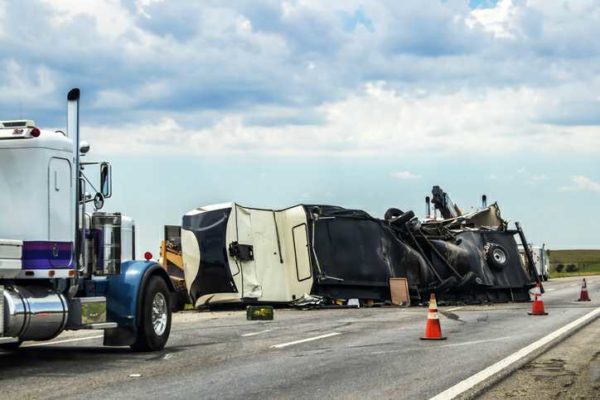 Tractor-trailers wreak havoc on Texas’ highways. During one recent 18-wheeler accident on Interstate 35, Texas police officers who had responded to a tractor-trailer rollover accident narrowly escaped being hit themselves when a second tractor trailer skidded out of control, off the road straight towards them and the tractor-trailer crash site.

The rollover truck accident happened on May 12 on Interstate 35 near the 290 Exit in Belton, Texas, according to KWTX 10 News. Belton police were responding to the first rollover tractor-trailer accident shortly after 7:30 p.m. on a rainy Tuesday night.

How the crash occurred

The first truck driver lost control of the tractor-trailer, which crossed a median and two lanes of access road on I-35 before coming to rest on the side of the road, according to KWTX News. The Belton police responded to the first truck accident soon after.

Rain can clearly be seen in the dashcam video footage of the accident captured by one of the two patrol cars parked near the scene of the truck accident. The cause of the rollover truck accident has not been reported as of this time.

In 2017, there were a total of 621 large trucks involved in fatal motor vehicle accidents in Texas, according to the latest statistics compiled by the National Highway Traffic Safety Administration (NHTSA). That figure was the highest death toll for any state in the country that year, according to the NHTSA.

If you or a loved one has been injured in an accident caused by a tractor-trailer or another large commercial truck, contact our law firm and schedule your free consultation to learn more about your rights and your legal options.