Home » Self-driving trucks ready to do business on Texas roads

Self-driving trucks ready to do business on Texas roads 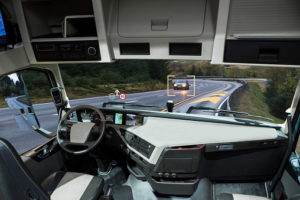 In the near future, you could be driving between Dallas and Houston when you notice a trucker on the highway. Well, not actually a trucker, because no one is behind the wheel. That’s right – no human driver!

California-based Kodiak Robotics has opened an office in Dallas with the goal of establishing a self-driving truck route between the city and Houston. Initially, a “safety driver” will monitor the 18-wheelers and guide them under some circumstances. Eventually, though, the company hopes to have fully self-driving trucks delivering goods throughout the state.

“We have believed for a while that Texas is a very attractive place for the product we’re building,” said Alden Woodrow, co-founder, and CEO of Ike, one of several other companies interested in robotic trucking in Texas.

What Makes Texas So Attractive for Self-Driving Trucks?

Several factors put Texas high on the list of states where automated trucks may soon be sharing the road with human drivers. Among them:

You Are David, the Truckers Are Goliath – You Need Help

The dangers of being involved in an accident with a fully-loaded 80,000-pound 18-wheeler, regardless of whether it is driven by a human or is automated, are obvious – your 4,000-pound passenger car is outmatched and its occupants are in serious danger. Your injuries could be severe, possibly even permanent. You may be out of work, unable to support your family or pay your bills. An insurance company, interested only in paying you as little as possible, will make a financial settlement offer that falls far short of meeting your needs.

You need truck accident attorney Jeff Weinstein, of Weinstein Law, based in Athens, handling your case. A former prosecutor, Weinstein has been representing truck accident victims in Henderson County for 20 years. He can rely on his experience and expertise to take on the trucking companies, their lawyers and their insurance companies while you focus on the most important issue – your recovery. Because attorney Weinstein works on a contingency fee basis, you pay him nothing unless he wins your case.