Home » The best ideas to avoid the dangers of drowsy driving

The best ideas to avoid the dangers of drowsy driving 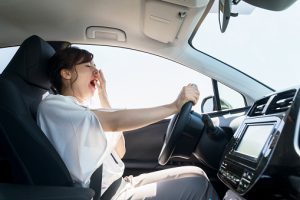 It's been a long day and you're not as fresh and alert as you were during your morning commute. The effects of that coffee you had on your lunch break have already worn off. Your eyelids feel heavy as you stare at the road in front of you in a daze. Maybe it's those hours of sleep you missed last night. Perhaps you're fatigued from your job. You may still be adjusting to daylight saving time.

Your conscience tells you that you shouldn't continue driving in this state, yet you roll along anyway. Why not? You only have another 15 minutes before arriving home. Then comes a drop of the eyelids and a nod of the head. Then a sudden awakening jolt. After that split-second of dozing off behind the wheel, you're relieved that a serious accident didn't just occur.

If this sounds like you, you're not alone. According to a National Sleep Foundation survey, roughly 50 percent of respondents admitted to driving while drowsy and another 20 percent admitted to falling asleep behind the wheel within the past year.

While some drivers may get away with a quick doze, many others aren't so lucky. According to the National Highway Traffic Safety Administration, around 100,000 estimated crashes attributed to drowsy driving are reported by police each year. As a result, an average of 1,550 people lose their lives and 71,000 suffer injuries.

Who is the most at risk?

Any driver can be at risk of falling asleep behind the wheel, but certain groups of people are most at risk, particularly due to occupations, demographics, and medical conditions. These include:

Nobody can decide when they're going to fall asleep. Without adequate sleep, staying awake can sometimes be impossible. However, signs of drowsiness will first manifest through:

Drivers who start to feel drowsy should immediately get off the road. It's best to find a safe place, pull over, and take a short nap. Consuming caffeine can offer a temporary boost; however, drivers should not expect caffeine to replace sleep.

Attorney Jeff Weinstein has seen the devastation caused by drowsy driving. These catastrophic accidents often happen at full speed and result in devastating injuries. At worst, someone loses their life because of a drowsy driver's irresponsible behavior.

If you or a loved one suffered injury in a crash, contact our Athens, Texas law firm today to discuss your legal options.